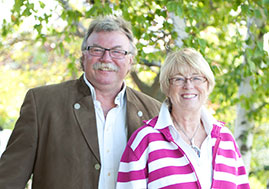 Joan grew up in Exeter just 15 minutes from Lake Huron. Summers were spent with picnics, sunsets, swimming, beach bonfires, camping in the Pinery, cottage rentals, roller skating in Grand Bend and a dream to live on the Lake Huron shoreline. Joan lived in Germany for a year at the age of 21. Learned to speak German and pursued her roots. She had a 10 year career as a flight attendant with Air Canada. In 1989 Joan purchased Brentwood on the Beach and opened a bed and breakfast where she welcomed guests for 25 years.

Peter grew up in a rural area in northern Germany very near the North Sea. He lived in Canada for 5 years as a child from the age of 9 to 14. He attended an English school in Montreal. The family moved back to Germany. He worked in France for 8 years. He learned to speak French during those years. In 1994 he immigrated to Canada to be Joan's partner both in marriage and in business.

By 1998 they purchased the Bayview Cottage and in 2009 they had the Upper Beach House built. With Peter's high energy, creativity and driving force, he created gardens, walkways, stairs that lead guests to the shoreline.

On October 10th, 2014 after 25 years of welcoming guests to their bed and breakfast, Joan and Peter sold Brentwood on the Beach.

Joan and Peter Karstens continue to own and operate the Brentwood Cottages. It is their pleasure to share this cottage lifestyle and life on Ontario's West Coast.
Come Coast Awhile.......